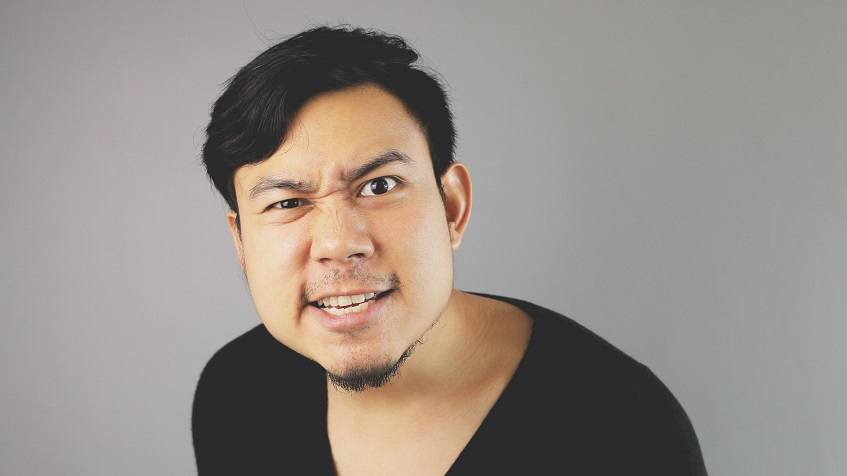 Asians and beards. The uneasy relationship that many Asian men have with facial hair is well-documented. Online forums show Asian or Asian American men reaching out to their digital and bearded peers confessing their inability to grow a beard.

Reddit threads return to the same question, posed sometimes by Asian men themselves but more often by the uninformed and the curious: Can Asian men grow facial hair?

Of course, anyone who bothers to look deeper, or even does a quick Google search of images, will find the answer to that question is obvious.

Yes, Asian men can grow facial hair. But then sometimes, they can’t, or sometimes it’s very sparse. So why is that?

The most commonly accepted explanation for why some populations have more facial hair growth than others is related to human evolutionary development in response to the environment.

Once human migration across the world started, the climates of their new habitats determined the amount of facial and body hair that would be expressed in various groups of human beings.

Human groups who settled in colder climates, such as most of Europe, developed thicker facial and body hair, nature’s way of ensuring their survival. 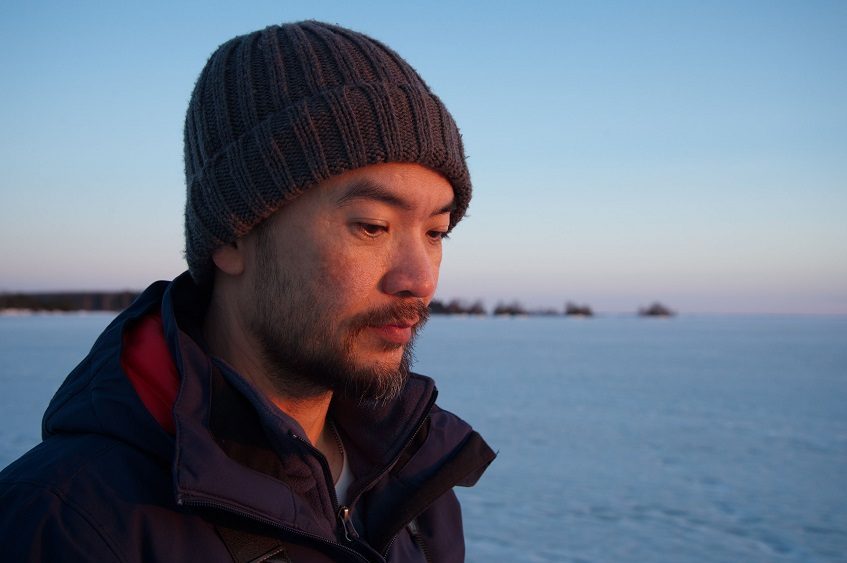 Likewise, when human groups settled in warmer climates, such as much of eastern and south-eastern Asian, facial and body hair became less necessary, so their bodies did not evolve to express those genetic features as much.

A map of male androgenic (body) hair supports this theory, with populations of people with body hair being less dense in hotter climates as opposed to colder climates.

An Empire of Beard Signs

Despite the environmental reasons that explain the differences in beard growth across the people of varying climates, the beard has come to represent more than a biological expression: the beard signifies power.

This widespread view of the beard as a sign of domination has resulted in the dissemination of certain myths, such as the beard being an indication of testosterone levels.

But those culturally prevalent beliefs about what beard hair signifies might also have an influence on human cycles of natural selection.

According to a study reported by the BBC, the social perception of beards as signs of masculine superiority allows men to flaunt their beards in acts of competition and intimidation while they are on the chase for a mating partner.

The social signification of the beard serves into its biological function so that the beard has evolved as a tool of natural selection.

If all is fair in love and war, then the beard as an act of flexing dominance can easily be seen not just as a tool of competition for mating rituals, but also in events of the war. 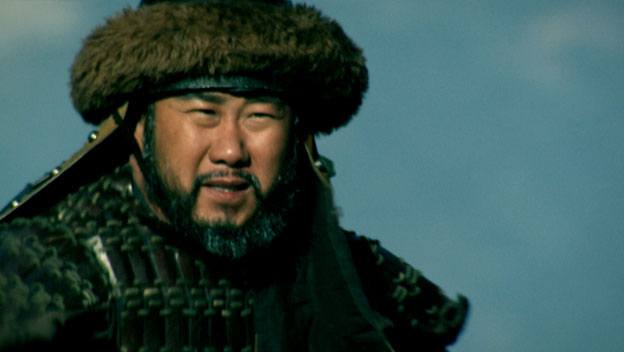 The full potential of the beard as a weapon of psychological warfare might be better understood if one recalls how Genghis Khan, ruler of the Mongol Empire, conquered most of Asia and parts of Europe, all while sporting a patchy goatee or Van Dyke, depending on the depiction you’re looking at.

Famous Asian Men with a Beard

Aside from Genghis Khan, there are other famous Asian and Asian American males with beards or some form of facial hair. The most notorious Asian with facial hair is the fictional and racist archetype of the conniving Asian, Fu Manchu.

More impressively, contemporary Asians who know how to flaunt a beard include Ken Watanabe, internationally recognized Japanese actor, whom Western audiences might remember as Katsumoto in The Last Samurai, as Ra’s Al Ghul in Batman Begins, or as General Kuribayashi in Letters from Iwo Jima.

In each of these roles, Watanabe sported some style of facial hair, whether it was a patchy goatee or a neat mustache.

Anthony Thornburg is another Asian who in fact has become famous because of his facial hair. Of Norwegian, Swedish and Japanese descent, Thornburg broke out onto the modeling scene and quickly rose to stardom as people gazed in awe upon his long hair and becoming a full beard. 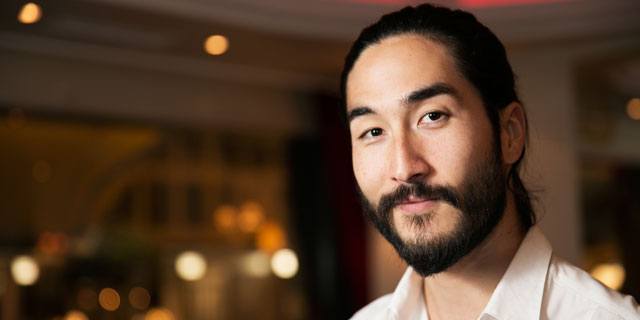 Fans of The Walking Dead will recognize Steven Yeun as another famous Asian American with equally famous facial hair.

The show depicts Glenn, Yeun’s character, transitioning from a freaked-out kid with no facial hair at the beginning of the series, to a man hardened by loss and the zombie apocalypse, a transformation that is signified by the growth of his facial hair. Yeun keeps his look sharp and clean, choosing to go with a thinned-out Van Dyke most of the time.

Whether you’re thinking of growing out your facial hair or looking for new beard style inspirations, just remember, it’s all about making the most out of the hair you have.

There are methods for growing a thick beard, or trying to grow a beard faster, and some beard growth serums have been shown to be effective.

But in the end, the facial hair should always be there to accentuate your face, and the different styles you choose should be the ones that best suit your hair and personality type.

This sophisticated look is about a clean cut with refined edges, whether that’s a trimmed mustache or a thin goatee.

The neatness and sharp lines of this style makes it suitable for professional situations, especially in business dealings with Asian businessman.

If you go to many parts of Asia, especially eastern Asia, you’ll notice a lot of men don’t grow out their facial hair, so if you choose to go bearded, make sure it’s well-trimmed and groomed.

Stubble, So Sexy for the Ladies

This look is a classic 5 o’clock shadow style that women especially love to run their hands over. Use a stubble trimmer to maintain this style. With well-styled hair, this look manages to be both professional and slightly unkempt. 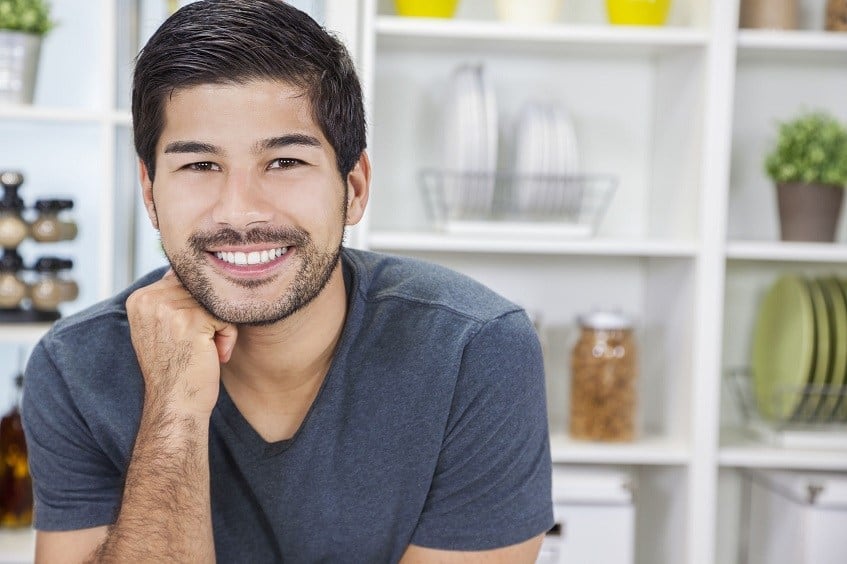 This one is also neat like the Professional, but paired with slightly tousled hair, the combo can also look casual and cool.

Keeping the mustache a little longer than stubble will make the hair on the upper lip softer for the ladies, and the slight stubble on the chin balances out the mustache and accentuates the jaw line. 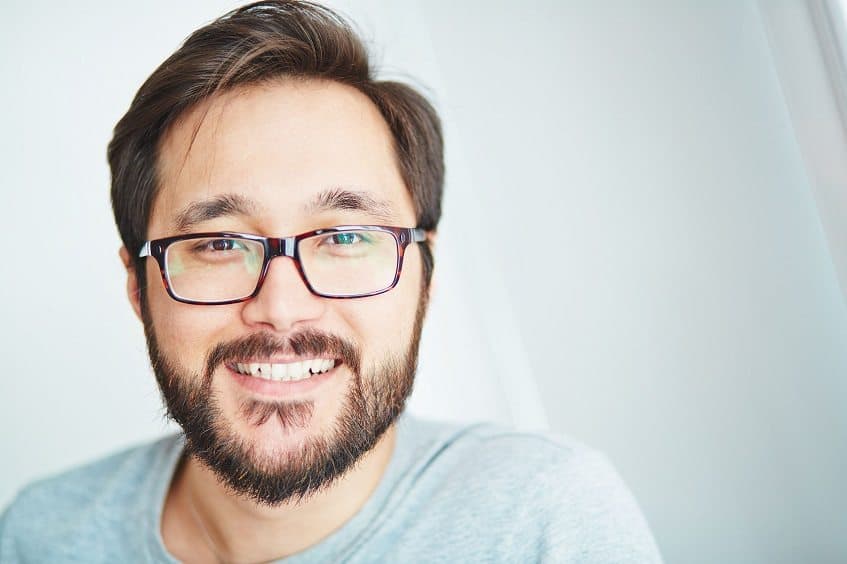 The full goatee adds some gravity to the jawline, making it more prominent and distinguished.

You can make this style more youthful or contemporary by adding a beard fade, which makes for a subtle transition in the sideburns. 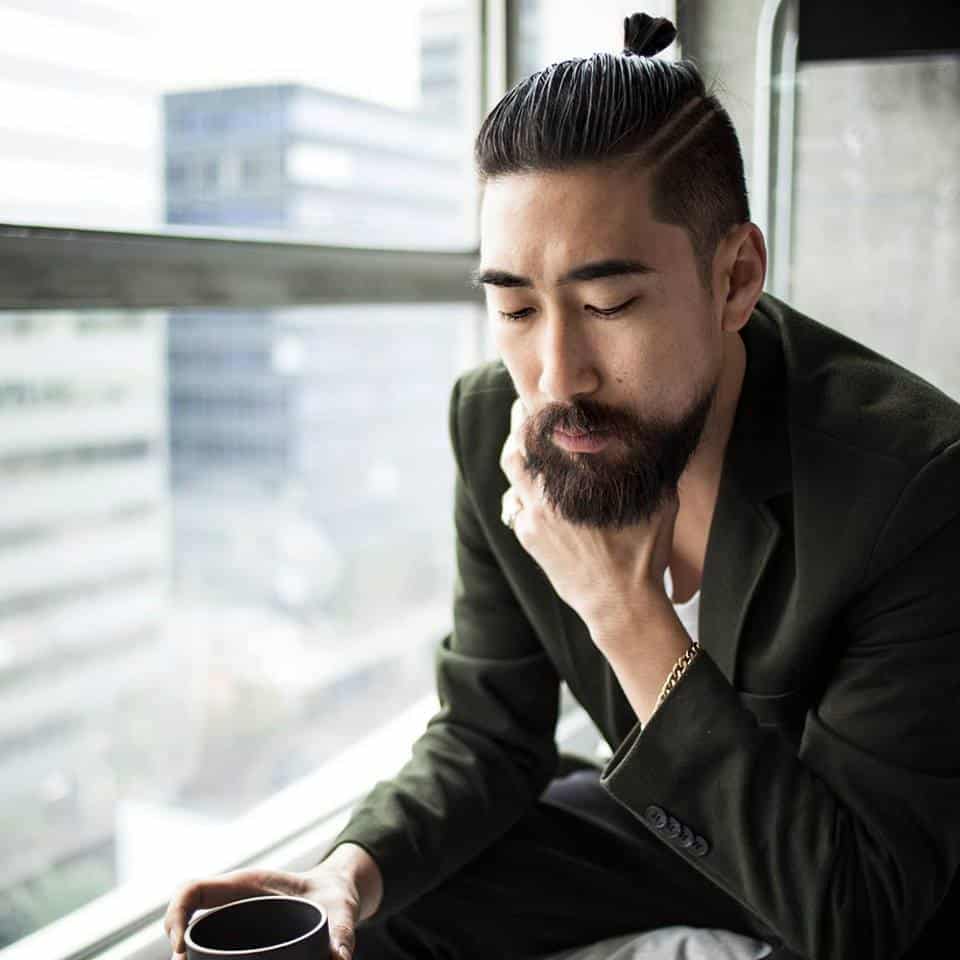 If you’re able to grow a full beard, go for it, man! Sometimes, though, Asian men will grow wispier beard hair, and if that’s the case, then it’s good to use beard shampoo regularly.

The moisture will give the beard hair increased volume. With thinner beard hair, it’s also a good idea to comb regularly, so the beard doesn’t look tangled and scraggly. 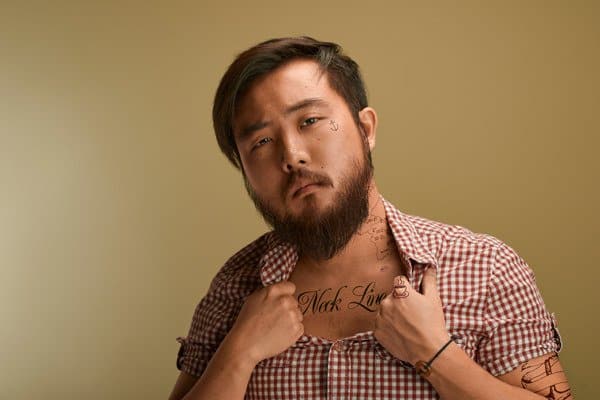 This subtle look combines the robust masculinity of a filled-in beard while also keeping the beard length trimmed close, giving the wearer a more mysterious and seductive appeal.

A reliable beard hair clipper is necessary for this style to keep it consistently trimmed. 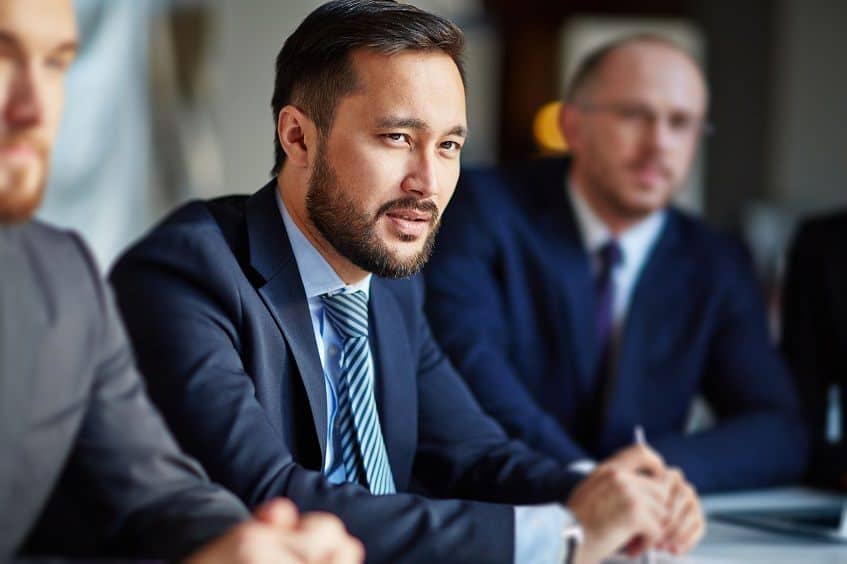 This combines the classic clean mustache-and-goatee pairing of the Van Dyke style with bold sideburns.

The Van Dyke traditionally does not have sideburns, but with the sideburns, it looks more contemporary and edgy. For this style, it’s good to keep some DIY mustache wax handy. 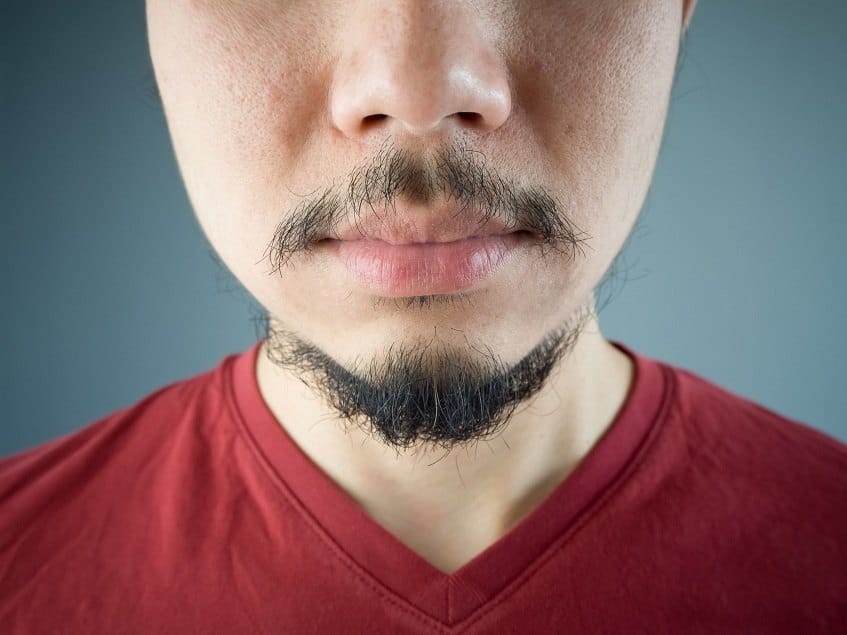 The full beard is a rockin’ style but despite the casual look, a long beard does require some routine maintenance.

In addition to combing it regularly, apply some beard butter to keep the hair soft and groomed. With a long beard, it’s also helpful to know some tips for trimming and shaping your beard. 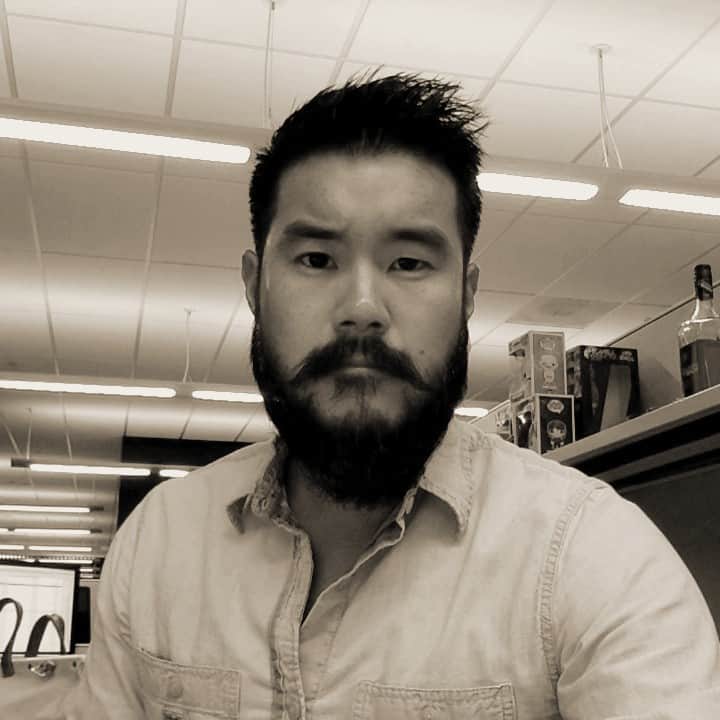 Free as a Fisherman

If the rough look of a beard gone wild appeals to you and your carefree spirit, then there’s nothing wrong with letting it go.

With the right face, the carefree approach to beard growth manages to look rugged and makes the wearer seem adventurous.

Just remember that if you’re out there in that salt air, you’ll want to give your beard a good scrubbing with some beard soap.

This is a distinguished look for men of any age. The full beard, when trimmed, manages to exude both strength and refinement. 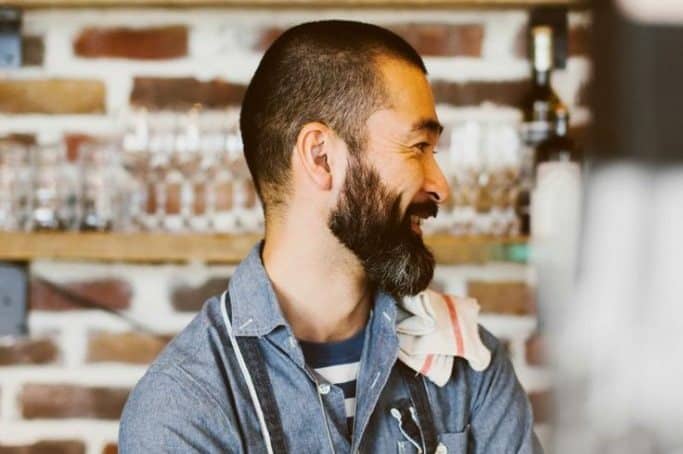